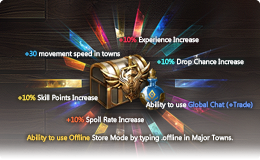 - When you try to log into account which is already in use, you will disconnect existing user after writing password instead of after chosing server
- During server restarts, now server will appear DOWN instead of not being on the list
- Messages while dismissing Alliance Member are now like on Retail
- Fixed two error messages while changing Title of Clan Member
- Fixed few issues with changing Clan Member's Affiliation
- Added few minor fixes to Gatekeeper Nobless Teleports
- Fixed "Critical Chance" passive skill, that gave too much Critical Chance to many npcs
- It's now possible to register to multiple Castle Sieges, as long as they don't start at the same hour
- Heart of Warding & Heart of Vulcano now have same chats as on retail
- Fixed messages given by using /partyinfo

- If you wear two epic jewelries and unequip one of them, passive effect is no longer removed
- Fixed issue with few kinds of Pets that were getting Exp from Monsters twice while being in Party
- Cursed Weapons are now always given to the party member who picked them up, no matter which Loot Distribution is chosen
- Sin Either can now reach level 81
- Fixed a lot of monsters who were supposed to be social aggro with only monsters of same id
- Nearby monsters can now aggro if you kill their faction member by single hit
- Castle Walls can now only be attacker by Siege Weapons
- Fixed issue with Doom Trooper, Hames Orc Overlord and few other monsters, randomly falling under textures
- Improved AI of Fairy Trees

- Fixed very rare issue of unability to use skills on competitor in olympiad match
- You will no longer lose olympiad battle, if you go outside of peace zone before being teleported
- Fixed rewards from Legacy of Insolence quest
- Fixed social aggression of Cursed Guardian
- Fixed issue with PayPal donations being added to our database with delay
- Fixed skill resist & shield block messages when npcs & summons are attackin you
- In dimensional rift, it's no longer possible to get into room with Anakazel by manual teleporting
- Updated Smartguard to version 3.1
- Fixed list of monsters that drop Dimensional Fragments
- Spoil Crush can now be correctly used when target has already been spoiled

Today I have released a major security upgrade & full anti-bot/script/HWID spoofing security update for RaidFight.
The changes can be foundbelow:

Fixed a problem in the java server core that caused message "Game server decided to close your game session." to appear for some players on some java server builds.

This week we will have 3x Events! Tuesday, 9th of June "Rates Increase by 25%", Friday 12th of June "6h Runes Giveaway"
and on Sunday 14th of June "3 Days Premium Account Giveaway"

Event Description
RaidFight will give away "6 hour" limited Runes of Experience/Skill Points/Drop Chance/Death's Deal Certificatein every character in Giran Town on Friday, 12th of June at 20:00 [GMT +3]

You can bring up to 3 characters per computer & receive the runes in all of them for free.

Event Description
RaidFight will give away "3x" days Premium Account in every character in Giran Town on Sunday, 14th of June at 20:00 [GMT +3]
You can bring up to 3 characters per computer & receive it in all of them for free.

You can buy Runes of Experience/Skill Ponts/Drop Chance and stack it with them and even if you are already aPremium Account owner you will receive an extra 3x days extra bonus in your subscription.